The Archives is not a bookstore, but we do have a number of books on the shelves focusing on the history of the NAB and the faith journeys of individual North American Baptist leaders and missionaries. The books listed below are available in varying quantities and can be requested while supplies last. Contact the Archives at rtschetter@nabconf.org or (605) 274-2702.

Sowing in Tears, Reaping in Joy: The Life Story of Florence Miller, Missionary to Japan 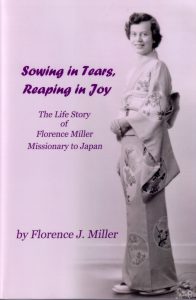 This book is based on excerpts from Flo’s correspondence to family and friends, as well as from articles printed in NAB publications. It was edited by Luci Lengefeld, a former missionary to Japan. It provides a firsthand view of the triumphs and trials of ministering in a foreign country from the perspective of a pioneer missionary. Learn more about the history of the NAB mission work in Japan and about God’s grace at work in the life of this truly dedicated woman of God. Also available in an e-book format and through Amazon.com or Barnes & Noble.

Life and Ministry of August Rauschenbusch 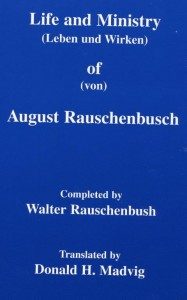 August Rauschenbusch’s biography shows his journey through the best education process of Germany in the 1800s to a life of faith as a Lutheran pastor who played a major role in the pietistic movement (a revival movement in German Lutheranism). After coming to North America, he was baptized by immersion, a huge and intentional step noted by Germans around the globe, and he became the first leader of the German Department of Rochester Seminary and a key person in the North American Baptist Seminary.

Heritage and Ministry of the North American Baptist Conference. 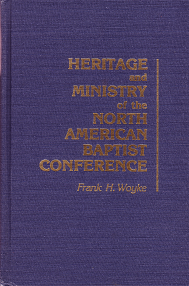 A classic history of the North American Baptist Conference from its early beginning in the Nineteenth Century and ending with the progress made up to the year 1976. It is the true story of a group of dedicated Christian believers, including the struggles and challenges, but most importantly the victories and growth both in North America and on foreign mission fields. This hardcover book is divided into five sections: The Beginnings: 1839–1865; Institutional Development and Further Growth: 1866–1889; Growth in a Period of Change: 1890–1918; A Period of Transition: 1919–1946; and Recent Developments: 1946–1976. Included are fifty pages of notes/sources that Dr. Woyke used to show the authenticity of this historic piece of literature.

Dr. Woyke served for twenty-two years as executive director of the Conference and wrote this book during his retirement.

They Came from East and West: A History of Immigration to Canada. 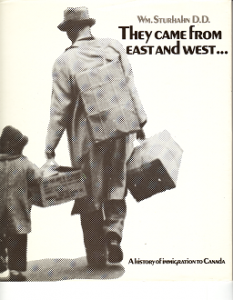 In this book, William Sturhahn, who was born in Germany of second generation Baptist parents, tells the stories of many people and their immigration to Canada, covering the period of 1947–1972. With the assistance of Baptists living in Canada, refugees from Russia and Austria living in Germany, along with German citizens, moved to Canada and the United States in search of land, freedom, and security. Of the three or more million immigrants, many became a part of NAB churches. The Canadian Baptists were motivated by the biblical teaching of Jesus to extend a helping hand to Christians who were oppressed and struggling in Germany. Not only were the refugees assisted in their journey to this new country but also, under the leadership of  Dr. William Kuhn, carloads of clothes and food were sent to Germany. Sturhahn points out how God was at work in this huge undertaking of faith and sacrifice. The book contains pictures of people who were a part of this history. The summary and appendix contain details of numbers and names and ages of each immigrant and the year of immigration.

Heroes of the Faith 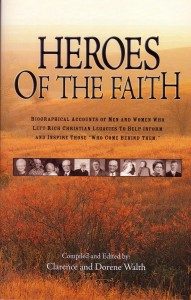 Edited by Clarence and Dorene Walth

The Walths served NAB churches in California, Oregon, and Illinois, and Clarence served as regional minister for churches in North Central States, followed by work in development at the NAB seminary in Sioux Falls and later for Billy Graham Evangelistic Association. Each article is written about a different person and is three to ten pages in length. There are articles about Henry Barnett (“A Man of God”), Arthur Fischer (“A Pastor with Confidence and Humility”), George A. Lang (“Glimpses of His Life”), Gustaf Schunke (“First Church Planter in the West”), and Rose K. Wolff (“A Pioneer Woman of Deep faith”), among others. There are twenty-one stories of faith journeys in this volume.

Heroes of the Faith: Volume II 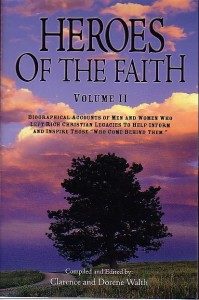 Edited by Clarence and Dorene Walth

The Walths served NAB churches in California, Oregon, and Illinois, and Clarence served as regional minister for churches in North Central States, followed by work in development at the NAB seminary in Sioux Falls and later for Billy Graham Evangelistic Association. Each article is written about a different person and is three to ten pages in length. This volume includes articles about Edward Arthur Kopf (“Friendly Neighborhood Pastor”), Edwin C. Kern (“Cultural Bridge-Builder”), Jacob C. and Irene Gunst (“From Sod House to Mansions in Heaven”), Pastor Daniel Fuchs (“The Acorn That Became an Oak”), and Dr. Martin Leuschner (“Christian Editor Living at a Fast Pace”).

Love Them for Me Laura 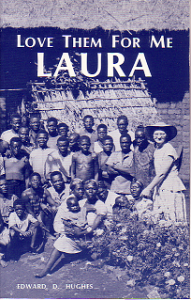 Edward Hughes was an NAB pastor in Winnipeg, Manitoba, who felt God’s call to help Laura Redding write a book of her experiences in Cameroon (1938–1978). Source materials include Laura’s diary and many letters and articles and personal interviews with Laura and others. One aim of the book was to call young people to missionary work.

Schulte was the first full-time General Missionary Society Secretary elected in 1892. Memories was originally published in German. Schulte shares about his fifty years of service in the home missionary work of German Baptist Churches in North America, which ultimately became the North American Baptist Conference. Memories includes sentiments about American Indians and stories of the Civil War, slavery, issues of immigration, and conflicts in churches. A detailed index and 165 photos make it a valuable tool for research. Shulte wrote Memories to encourage others in the service of Jesus Christ and to bless all who would read it.

Lois Glewwe added contemporary stories of the churches that are a part of Schulte’s work.

The German Baptists in North America 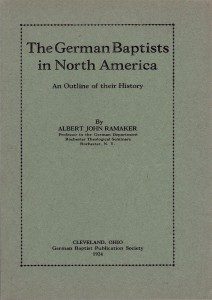 Written in German by Albert J. Ramaker, professor in the German Department at Rochester Theological Seminary, this book was published in 1924 and later translated into English, the first book in English to detail the history of the beginnings and progress of NAB work. It tells the story of Konrad A. Fleischmann, one of the earliest pastors of a North American Baptist Church, who is said to have done more than any other man in organizing the German Baptists in those early days. He was the first editor of Der Sendbote. This book also has stories of several other missionaries and pastors who were dedicated to preaching the gospel.

The founding of orphanages, old peoples’ homes, a girls home, women’s missionary societies, young people’s societies, Sunday schools, and foreign missions became an important part of the lives of these German Baptists as they migrated from the East Coast to other parts of the U.S. and Canada. Included is a quiz in the back of the book.

These Glorious Years: The Centenary History of German Baptists in North America 1843–1943

This is the record of one hundred years – 1843 to 1943 – of history of German Baptists of North America. Contributing authors include William Kuhn, A. J. Ramaker, Arthur A. Shade, Charles F. Zummach, F. W. C. Meyer, Martin L. Leuschner, Milton R. Schroeder, Otto E. Krueger, Mrs. H. G. Dymmel, Paull Wengel, Frank Kaiser, and R. P. Jeschke. Each of the thirteen chapters has a different subject and a different author. Black and white photos are scattered throughout the book, adding to the interest.

Growing Up with Grandpa 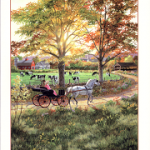 Beginning with Itterman’s travel by ship with his parents and siblings from Germany to Canada when he was only eight months old, he relates stories about his family life to his grandchildren in a delightful and often humorous manner. These twenty-three chapters are a great read when one needs a change from the more heavy stuff. At the same time and in a wonderful way, Itterman shares about life in his formative years. Many photos add to the interest of this real life story.

This is an inspiring biography of Alfred Saker who wished to be known only as a “Missionary to Africa.” Born in England in 1814, he was seen as “a weakly babe” and in the opinion of the old nurse “was not worth rearing.”

However, God had plans for him, and in 1843 he sailed to Africa to begin his missionary service there. The trials and tests that Mr. Saker and other Christian believers experienced did not keep them from continuing to share with the people of Africa about salvation through Jesus Christ. At the end of his life, Mr. Saker is remembered as saying, “Oh that I had another life to go out there” (to Africa). As the book relates, thus ends the story of this man who, in March 1880, “A sweet smile passed over the pallid, worn face as the ministering angels bore his spirit to the presence of his Lord.” 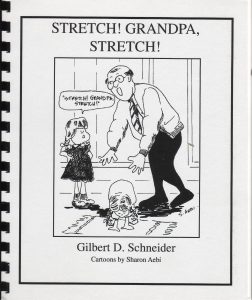 This is a delightful book about Schneider’s many experiences with his four grandchildren. In the preface he states, “Clearly, many grandparents believe as I do that we receive a priceless gift when a grandchild invades our space.” The illustrations in this 90-page paperback are by cartoonist Sharon Aebi. Schneider went to Cameroon as a missionary in 1947. In a humorous fashion, he writes of incidents relating to various meanings of the word “stretch.” 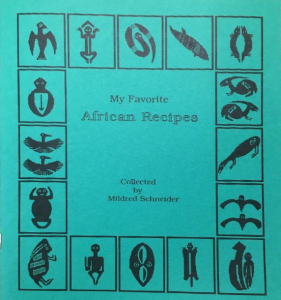 By Mildred Schneider
This collection of African recipes was put together by Mildred Schneider, wife of Gilbert Schneider, during her fifteen-year stay in Cameroon. (Along with Laura Redding, the Schneiders were the first missionaries at the Bamenda New Hope Settlement for lepers in Cameroon.) Along with recipes for food for physical strength, this recipe book adds a dimension of Cameroon folk wisdom to our understanding and insight. The reader will enjoy both reading about and sampling these tasty, nutritious treats.

You Who Have Dreams 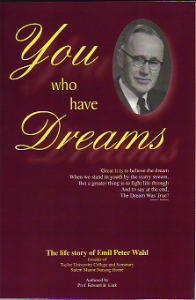 By Edward B. Link

This is the life story of Emil Peter Wahl, founder of Taylor University College and Seminary and Salem Manor Nursing Home.

The story begins in Emery, South Dakota, in the year 1909. Wahl’s parents had emigrated from southern Russia and settled in the Plum Creek area near Emery, where they homesteaded and opened a store in the town. The book continues with the family moving to North Dakota, Wahl attending Rochester Seminary, his marriage, his acceptance of the challenge from a fellow student to do pastoral work in Canada, his role as mission secretary of the Northern Conference, and the founding of seven churches.

In 1939, he became the founder of the Christian Training Institute, known as CTI. After his many years of Christian service, he was considered untiring in his retirement years. Link describes Wahl as a “dreamer and doer” who left his mark on many individuals and institutions for the greater glory of God. 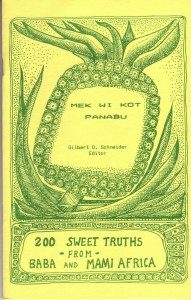 By Mildred and Gilbert Schneider

This short paperback is a celebration of wisdom collected by the Schneiders during their years as missionaries in Cameroon. These 200 proverbs are presented in Pidgin English because that is the language in which each “sweet truth” was presented to them. The Schneiders have translated them into English, noting that at times it is difficult to capture the rich flavor of the African idiom in translation. A word guide to the proverbs is included; also included is a Pidgin English pronunciation guide and vocabulary helps.