True Hospitality: Love for the Stranger 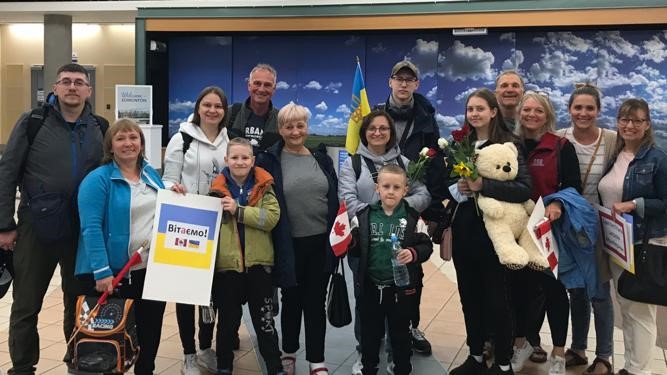 God’s love leads his people to serve in surprising ways. And in doing so, we not only express his love to those in need but are transformed as well.

Between the years 2000 and 2010, the number of displaced people around the world hovered around 40 million. Since 2010, that number has doubled. Currently more than 80 million of our global neighbours have been uprooted from their places of birth, their communities, their homelands. They’ve been forced to leave out of fear for their lives and a desire for freedom.

In response, and hastened by the war in Ukraine, McKernan Baptist Church in Edmonton, Alberta, developed the Refugee Assistance Ministry (RAM) in April 2022, with the goal of assisting a family to settle in Edmonton. Working with a local refugee support organization called Refugee Bridge, Pastor Dan Schroth connected with a group of nine Ukrainians, consisting of a family of six plus grandma and two female friends. Pastor Dan and the team at McKernan started to walk with them, building relationships via Facebook and Google Translate, and praying for them as they fled Ukraine in May.

While they waited on visas in Poland, the RAM team worked with volunteers from McKernan to raise funds, secure a rental house and furnish it, and gather information on the various processes for setting up healthcare, education, benefits, and more . . . and then we all waited some more. . . .

This month’s Missional Initiatives newsletter contains a reflection on Advent from Deb Judas, a lesson from Merv Budd on razing hell as evangelism, and a book recommendation from Cam Roxburgh.

We hope this monthly newsletter is an encouragement to you in the communities where you serve.

Advent officially began this past Sunday, but it’s not too late to sign up to have them sent to your email every morning or to catch up on the ones you might have missed. Check out this snippet from today’s devotional:

Zechariah was a man of God. He was a Levite, one of the few chosen to work in the Temple. This meant he was well-versed in the Scriptures and familiar with the stories of his forefathers. . . . However, his response – “How can I be sure this will happen?” – was not one informed by his years of learning or by his deep knowledge of the Scriptures or even by his shock at suddenly being in the presence of a heavenly being. Rather, his response seems to have been driven by a deep cynicism, a pessimistic outlook that asks questions driven by doubt.

Like Zechariah, we can walk through this world choosing to let our cynicism guide us, to look for the things that prove our cynicism correct. This ultimately pays a dark toll on our souls. What would it look like instead if we chose to seek out and look for the good – to let hope and love and mercy guide our steps rather than our cynical hearts? It is true we will inevitability be disappointed. Yet to live in this more difficult space where we cling to hope – not the false hope of those who are lost and cannot find their way home but the hope of those who know the Lord is on their side – this will allow our souls to truly blossom and grow in God’s goodness and grace.

Catch Up on the Ones You Missed