A New Kind of Sunday Rhythm 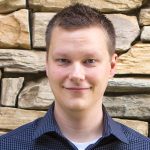 Pastor Ryan Sidhom thought it was a shame all the things people did want weren’t things they automatically associated with a neighborhood church. 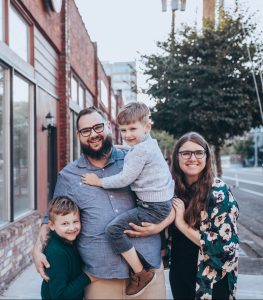 Ryan and Clarissa Sidhom, with their sons, Banner and Anchor

Simultaneous to this survey, Ryan was studying the early church in Acts and noted what he considered to be four tenets of what a church should be: devotion to the apostles’ teaching, sacrificially giving to provide for those in need, gathering together often to enjoy each other’s company, and constant devotion to prayer. As a result of this study in Acts and the neighborhood survey, River City Church developed a different kind of weekend rhythm they refer to as Study/Serve/Study/Play.

The first and third Sundays of each month are a standard worship gathering, with people coming to the church to sing together and learn together from a speaker at the front.

The second Sunday is always some service project directed outward toward the community, something where the whole family can serve, such as feeding their unhoused neighbors a hot meal or throwing a Christmas party for under-resourced families. For these, they partner with various nonprofit organizations to best serve the various needs of the community.

The fourth Sundays are for play. The most recent of these fourth-Sunday gatherings was a Hispanic/Chuukese/American Thanksgiving celebration potluck, but they have also shown movies and hosted game days.

When there is a fifth Sunday in a month, they take the opportunity to worship together with other churches or open it up to testimonies of God at work in their lives.

Through this unique rhythm of Study/Serve/Study/Play, this small church plant, one of the NAB’s newest, is having an outsized impact on their community. At only three-and-a-half years old, River City just surpassed 22,000 volunteer hours out in the community, which is roughly equal to one person volunteering nonstop for two-and-a-half years straight.

Not only are they becoming known among their community, they are becoming known to each other. One man recently shared how at his previous church he would avoid people at the store when he recognized them because he didn’t know anything about them, but at River City he was actually able to learn people’s names and get to know them because the church set aside whole Sundays specifically for connection.

Even though River City is a young church, and like many they were hit hard by the pandemic and shutdowns, they are still finding unique ways to serve their city, connect with one another, and grow as followers of Jesus. They have also been able to connect with a number of individuals who self-identify as curious about spiritual things, and in just over the past year or so they have seen six people start following Jesus.

Ryan shared, “I literally feel like I’ve got a front-row seat to the book of Acts, and I’m just in the audience.”