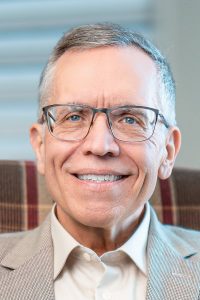 The journey of the North American Baptist Conference with the Cameroon Baptist Convention has been filled with God’s leading and God’s blessing. From 1899 when missionary Carl Bender arrived in Cameroon, the commitment of the NAB has been to leadership development and partnership with Cameroonian Christians. In the subsequent years, there have been many missionaries who have focused on medical, educational, and theological training; the one constant in all of this has been the desire to train leaders.

I am the son of German immigrants who became members of an NAB church. As a young man, I listened to missionaries as they shared with our church about God working in Cameroon. Subsequently, as an NAB pastor I came to personally know missionaries who served with the CBC, and I continued to hear the stories of God working. I always heard about the graciousness and faithfulness of the Cameroonian Christians. Over the years I have heard about the development of the hospitals and medical clinics, the planting of churches, the training of pastors, the growth of men and women ministries, and the development of youth and children ministries. In all of this, the leadership of the Cameroonian Christians has been clear, and the partnership connection with the NAB has been evident.

Ten months ago, I assumed the position of executive director of the NAB. As I began my new role, I was told there had been a recent transition in the leadership position of the CBC. The role of executive president had been recently filled by Rev. Dr. Charlemagne Nditemeh. In the subsequent months, we were able to communicate with each other and exchange warm greetings.

It was this February that a group of us from North America travelled to Cameroon to participate in the dedication of the Mbingo hydroelectric dam. We also had the opportunity to spend time with our missionaries and meet with the CBC leaders. I was able to meet, in person, Rev. Dr. Charlemagne. The executive president is a man of God who loves the Lord Jesus Christ passionately. He is a man of great wisdom who has had a lifetime of teaching and serving, of leading men and women, and of living the truth of God’s word. Rev. Dr. Charlemagne is the God has chosen to lead the CBC at this time.

The CBC has seen God increase the reach and the scope of their ministry. There are 1,500 churches in the CBC, as well as hospitals and health centers. The CBC has schools to raise up leaders and many programs to serve the people of Cameroon. The country is currently enduring a very difficult time, a time of great civil unrest. There has been displacement, kidnappings, and shootings; there has been brokenness and death as a civil war has raged. In the midst of this tragedy, I have seen a committed focus in the leadership of the CBC and Rev. Dr. Charlemagne to reach into the brokenness of lives and to share the Gospel of hope and healing with those who are hurting. I have seen these leaders commit themselves to empower and to equip and deal with the trauma and heartache that have come with this conflict. As servant leaders, they are seeking to make a difference with the Gospel of Jesus.

In my discussions with Rev. Dr. Charlemagne Nditemeh, we affirmed the long-standing connection and partnership between the CBC and the NAB. Rev. Dr. Charlemagne affirmed the CBC considers the partnership of the NAB as crucial to who they were and to who they are becoming. I told him our relationship will continue to grow and mature and change, but the commitment between the CBC and the NAB remains strong because God has established it and empowered it. I am honored to work alongside Rev. Dr. Charlemagne Nditemeh as a friend, as a colleague, and most importantly as a brother in Jesus Christ.