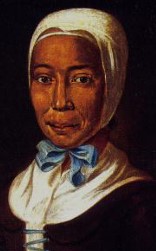 International missions is a deep cultural value of the North American Baptist Conference. This Black History Month, we recall a sister of African descent who has been dubbed by some scholars “the Mother of Modern Missions.” When we think of the origins of missions in the West, we typically recall the work of William Carey in India or Adoniram Judson in Burma, but a formerly enslaved woman predated them both. Rebecca Freundlich Protten was born in 1718 into slavery in Antigua. Protten was kidnapped when she was around 7 years old and sold into slavery on St. Thomas in what is now the British Virgin Islands. It was there she came to faith in Christ through the work of Moravian missionaries and aspired to become a missionary herself.

She gained her freedom at some point and subsequently used her free status to share the Gospel with enslaved peoples, mostly women. Historian Jon Sensbach writes that Protten preached to hundreds on the island, a Danish sugar colony in the West Indies.

Protten was imprisoned for a time, as her preaching was seen as a threat by the local authorities. But once released, she was sent to the Moravian community in Herrnhut, Saxony, in what is now eastern Germany, where she continued her ministry. One of the Moravian missionaries, Friedrich Martin, wrote of her that that Protten had done “the work of the Savior by teaching [. . .] and speaking.”

Protten eventually died in 1780 in the city of Christiansburg, Gold Coast, West Africa, in what is now the nation of Ghana. She led African female slaves to Christ, discipled them, and taught them to read.

As Danté Stewart writes, her legacy is one of being “more than a teacher; she was a mentor [. . .] a prophet, determined to take what she regarded as the Bible’s liberating grace to people of African descent.” Her travels “took her to the slave quarters deep in (St. Thomas’) plantation heartland, where she proclaimed salvation to the domestic servants, cane boilers, weavers, and cotton pickers whose bodies and spirits were strip-mined every day by slavery.” And as a result, “St. Thomas suddenly became the Americas’ new axis of Afro-Protestant conversion.”

We praise God for those brothers and sisters who have gone before us with passion for making disciples. Rebecca Protten went before us as a valiant voice sharing the Gospel across three continents.