We Are a People of Prayer

As we enter 2019, let’s commit to praying without ceasing. Watch the video above to hear Dan’s heart for prayer as we begin a new year.

Each time, before you intercede, be quiet first, and worship God in His glory. Think of what He can do, and how He delights to hear the prayers of His redeemed people. Think of your place and privilege in Christ, and expect great things! —Andrew Murray

Freedom of Religion in Bulgaria 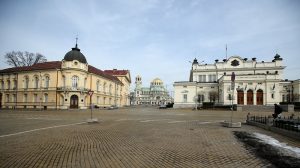 Under the leadership of William Kuhn, then-director of NAB International Missions, the NAB played an important role in the initial establishment of the Bulgarian Baptist Union some eighty years ago. With this history and deep connection in mind, please read the following article, which summarizes some of what our Bulgarian Baptist brothers and sisters have been going through as of late, and join us in praying for this nation. 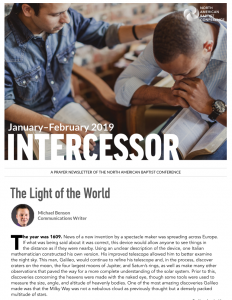 Join our faithful prayer warriors in praying for the NAB family with the most recent edition of the Intercessor. To view or download, click the link below. If we can be praying for you or your church, or you would like to receive the Intercessor, please let us know at communications@nabconf.org.

Shan Reed, NAB Missionary in Japan. Shan Reed has been serving as a long-term missionary in Japan since 2001. For the past six years, she has been an integral part of the Komyo Christian Church family, which she helped plant with Paul and Melissa Ewing. Shan has seen God at work in a lot of the areas of ministry she serves in, including with the Japan Baptist Conference youth, the Anointed Gospel Choir she is a part of, and the ongoing English classes and baking classes at Komyo Church. Pray for Shan as she works with the Japan Baptist Conference youth. Pray as well that the events during the Christmas season would continue to bear fruit in new relationships and deeper understandings of who Jesus is. For more information, visit nabonmission.org/missionaries/shan-reed