God is moving, and so is Elsie Lewandowski! 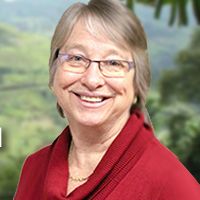 In 2019, the Mission Advisory Team (MAT) was meeting with Kerry Bender, VP of International Missions. Tanya Gericke, one of the MAT members, spoke with excitement about Jason and Erin Bergman and the potential of them being called as the newest missionary team members at Camp Falcon Rock in Romania. One of the challenges, however, would be the educational needs of their four young children.

Within an hour or so of that conversation, several members of the MAT spoke with Kerry privately about Elsie Lewandowski, who has been a missionary in Cameroon educating missionary children and training national school teachers. Elsie was nearing the end of her term in Cameroon in 2021, and possibly retirement, and the question was raised if this could be an answer to the challenge of educational needs for the Bergman children.

One of the people who raised this idea with Kerry was Calvin Hohn, field director for the NAB in Cameroon. Speaking about Elsie’s service and this opportunity, Calvin recently said:

Elsie has spent the last twenty-five years in Cameroon assisting dozens of families homeschool their children. She has educated hundreds of children from many different backgrounds. All this experience, together with her own love of learning about people and places, makes Elsie a great fit anywhere she’s needed. We’re excited for Elsie and her Romanian opportunity.

Kerry then reached out to Paul and Tanya Gericke, field directors for the NAB in Romania, as well as the Bergmans, to discuss this as a possibility. There were a lot of questions and details to be worked, but after a meeting with Elsie via Zoom, Jason and Erin were thrilled with this as a possible solution and are looking forward to Elsie assisting them with their children’s education. As Jason stated, “We know that God had a good plan for our family that included Elsie, and it came about in a way that only God could do.” In addition, the Gerickes are excited to invite Elsie to the team at Camp Falcon Rock.

In recounting his first conversation with Elsie about this possibility in January of 2020, Kerry states that there was an infectious giddiness in Elsie as she talked about this possibility. She stated that she always wanted to visit a part of Europe but never thought she would be able to go. In a recent correspondence with the NAB, she stated, “I am very excited about this position and grateful for the opportunity to serve!”

As the NAB family, we are so grateful that God is working and bringing new missionaries to the field, as well as finding new and exciting callings for some of our veteran missionaries! God is moving! And so is Elsie!